This method is quite comfortable for the patients, especially after removing the external fixator. Muscular contractures are still possible as for all other techniques. The operation is longer with respect of HEF, there is a considerable blood loss and carries the risk of fat embolism. In case of delated consolidation there is the option od compressing the new forming bone before removing the external fixator. Rarely bone graft is needed.

At the end of the treatment, when a solid consolidation of the new bone is achieved the nail is removed.

Lengthening the tibia with a nail is often associated with permanent anterior knee pain.

This method is more expensive (almost twice the cost of an external fixator even thought less expensive with respect of intramedullary extendable nails) due to the cost of the nails. 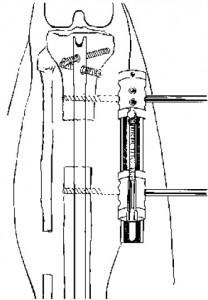 Possible risks of this procedure:

Do not hesitate to contact us for further questions